Rain City Rock Camp debuted in the summer of 2009 with 39 campers and 50 volunteers. Since then, camp has doubled… and tripled… and the community of participants, volunteers, and supporters has grown with it. The theme of Rain City Rock Camp for Girls in 2013 is “Make a Scene,” not only because we want girls and women to unabashedly express themselves onstage, but also because we are seeing a new scene emerge that lives and breathes the mission of RCRC.

And now, a little history
The Riot Grrrl scene was born in the early 1990s out of Olympia, Washington, a town located one hour south of Seattle. Women at The Evergreen State College were fired up about feminism, marginalization, sexism, and abuse… both in music venues as well as off the stage. In the punk scene, mosh pits were a “dude” thing. Guys handed their jackets to their girlfriends and joined the pit, leaving women literally at the fringe of the crowd. Kathleen Hanna of Bikini Kill noticed there wasn’t a place for local artists, especially female artists, to affordably play and express themselves, and created an independent art gallery where bands could play in Olympia.

All-female bands took the stage. They screamed into the microphone about sexism and homophobia. They invited self-proclaimed Riot Grrrls to stand in the front row, linking arms and pounding their feet to the music. Bands like Bratmobile and Heavens to Betsy performed, with little experience on their instruments, but with the full support of an experimental culture.

Kathleen Hanna carried the movement to DC, where Bikini Kill ultimately resided. They played shows with Fugazi, and together formed and defined the DC punk movement. As in Olympia, punk was only partially about music. The music was a vehicle to express political beliefs. Through performance, she asked the audience to dissect how society’s belief systems impact the way women are treated.

Riot Grrrl bands banded together and toured the US, passing out zines to teach other women about the movement. They organized feminist festivals in DC and Olympia and invited women and girls that they met on tour. With Xerox machines and the power of word-of-mouth, chapters emerged in Minneapolis, Omaha, London, and many other cities.

The Riot Grrrl scene was short-lived, but many members have continued by volunteering for Girls Rock Camps nationwide and worldwide. The Riot Grrrl philosophy still pulses through the veins of the Girls Rock Camp Alliance member organizations. Get up on stage. Express yourself. You don’t need a lot of experience to be here. Trust your instincts. Make noise. There are over 40 organizations worldwide using the same model to teach women and girls how to play music, and simultaneously engendering self confidence – messages that are still rare for females.

In September of 2012, after Ladies Rock Camp Seattle, we saw a tipping point. A slew of all-female bands formed, perform at local venues, and support one another’s shows. A scene is forming right here in Seattle, and we are changing the face of rock ‘n’ roll. The theme of Rain City Rock Camp for Girls 2013 is “Make a Scene” because we want to educate our community about the scenes that have emerged historically in the Pacific Northwest, namely Riot Grrrl and the grunge movement. In addition, we want to take some time to define our own scene. While our roots are in the irreverent, plaid-wearing grunge scene, and the politically charged Riot Grrrl scene, we have a new purpose: to teach young girls and women about how to play music, about feminism and self defense. We welcome people of all ages, gender identities and races. The scene only begins in the small RCRC office in the U District, and it is the strong community of women and girls that will ultimately define the scene that is forming today. 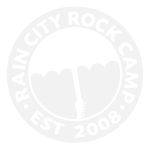